The world renowned philosopher Rudolph Steiner predicted that pure sound tones will be utilised for healing before the end of this century. Sound has been resourced by all world cultures throughout time immemorial to worship, offer praise, make more whole or to heal, strengthen, rejuvenate and inspire the listener on emotional, mental, spiritual and physical levels.

Useful concepts to grasp when understanding pure sound healing are: Entrainment, which refers specifically to synchronization of a whole organism or targeted parts of its organ system, with an external perceived pure sound source; Resonance, in physics, this refers to the phenomenon of when the vibrations of one object oscillating in a pure sound frequency causes a second object to start vibrating in resonant mimicry with the first. This produces sonic sympathy (see diagram) and can be measured in hertz Hz = cycles per second. Dissonance, by contrast refers to discordant sounds or interfering acoustic frequencies producing a lack of harmony in music, or in this case, the human biofield. 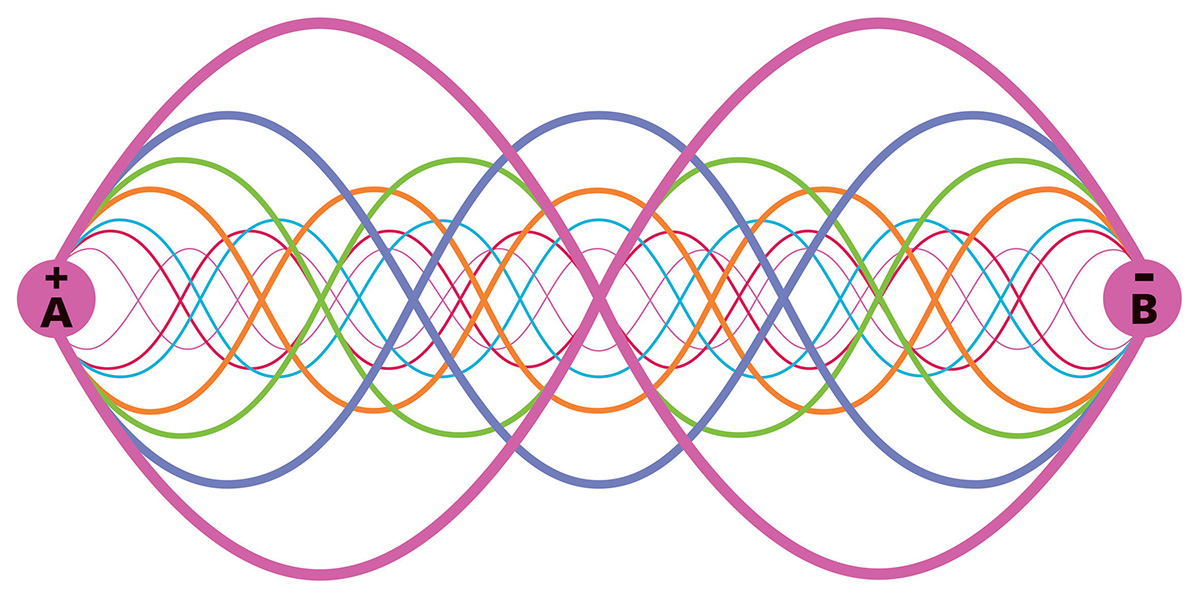 The term ‘biofield’ pertains to the energy fields that surround and extend beyond the outline of the human physical body, a fact now accepted by much of mainsteam science. There is a rapidly growing area of research demonstrating and affirming these subtle fields that it has referred to specifically as the human biofield.  Eastern equivalent terms such as Chi (Chinese/Asian) and Prana (Indian) have long been in existence, reinforcing the modern concept of the biofield. This life-force field, is noticeable to human awareness as it can be sensed to be animating the body and powering our daily life. This field is superconductive and can arrive in resonance with healing pure sounds, thereby reconciling dissonance, resulting in the biofield becoming more in tune and arriving at a more efficient level of baseline functioning. The more efficient the workings of the human biofield become, the more the body is permitted to achieve a greater level of physiological functioning that inevitably leads to enhanced levels of life expression, resulting in a better quality life.

Dis-ease or illness can be conceived as out-of-tune time imprints within the body and its biofield. Working with pure sound within this energetic field, one can encounter first had the phenomena of entrainment, resonance and dissonance. Using intentional pure sounds, the pure sound practitioner offers up or ‘lends’ sound vibrations that encourage the body and its field to return to harmony once again. In a healthy body, all its component parts produce a symphony of harmonious sound, yet, should one member of the orchestra loose their music sheet and play disharmonious notes then this would lead to the experience of dis-ease. Allopathic medicine would by analogy just remove the offending musician; in contrast, pure sound healing would instead attempt to correctly adjust the resonant frequency of the out of tune player, thereby restoring harmony to the whole orchestra of the body/mind/spirit unit.

The human body is composed of around seventy per cent water and, by being exposed to intentional pure sound healing, the water that is within us may be positively informed and encouraged to become more highly coherent. The nervous system is affected when pure sound frequencies interact with it via the tympanic, auricular and vagus nerves. This partly explains why sound can encourage very deep states of relaxation, rejuvenation and restful brain states given relatively short amounts of time of exposure to pure sounds. Quantum physics affirms that all life is mostly ‘space’ and yet this ‘space’ has both energy and vibration – therefore it follows that by altering the vibration of this ‘space’ it is possible to affect needed change at all levels, from molecules and cells, up to organs, organ systems and  the whole body (interior world) and likewise onwards to the (exterior world), biosphere, cosmos and ultimately the universe.

The ever-expanding field of epigenetics includes the exploration of the effects of environment on cellular behaviour, and  how the epigenome can switch off or on healthy genes in response. These environmental influences include exposure to sound, pure or otherwise, but also the combination of a human’s physical, social and personal beliefs, perceptions, lifestyle, habits, behaviours and regular mind-body practices. What used to be known as  ‘Junk DNA’ , that is where initial research was unclear as to its function, is now known to play an important role in gene expression. This also offers another pathway whereby environmental signals affect gene expression.

The effect that sound has on matter can be clearly seen in cymatics imaging. The term, coined by Hans Jenny (1904 – 1972) is derived from the ancient Greek meaning ‘wave’. When the surface of a membrane is vibrated by sound or by rubbing, regions of maximum and minimum displacement are visible, the best example being in sand which readily forms cymatic patterns.