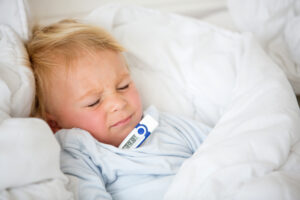 The pressures on A&E Departments this summer are comparable with those usually expected only in winter, and a significant proportion is due to parents bringing in young children with mild fevers that could be cared for effectively at home.

Recent findings from the three Royal Colleges of Medicine show that parents who have not previously seen their children having a fever were taking them straight to A&E, rather than seeking help from their GP, pharmacy, or a qualified natural medicine practitioner. Then, due to the higher numbers in A&E, the increase in waiting time before being seen and assessed causes distress for all concerned.

The advice given to parents is that GPs or pharmacies should be a first port of call, and of course seeking the help of a natural medicine specialist is another viable option to consider, as this integrated approach has much to offer, aside from taking pressure off an NHS already under strain.

Understandably, this can be a scary time for both the parents and the child, but it helps to be informed first. Investing in a good quality, reliable, clinical digital thermometer allows a parent to take their child’s temperature either under the tongue, from the armpit or rectally. It is vital that a child with fever be kept hydrated with plenty of cool but not chilled water, and if bathed it must be in tepid but never cold water, to avoid bringing on a chill. Babies of two to four months old often spike a fever – a naturally occurring fever often resolves itself from expression as a cold, diarrhoea, or skin rash, as the toxins are eliminated from the system.

If a baby under three months has a temperature of 38C or higher, parents should straight away seek medical advice or bring the child into A&E. For babies of three to six months old the NHS benchmark is 39C. For under 2s a fever of above 38C lasting for more than a day should be checked, as should fever spikes of 40C for a child of any age. Taking the right action in time is crucial, as procrastination and inaction can be damaging to health, especially in the acute and sometimes emergency situations presented by fevers.

It is not at all uncommon for children to produce fevers when they are ill. A fever may be a sign that infection is present and, in response, the body raises its internal heat to impede the function of the pathogen(s) in an attempt to protect itself. Providing the fever is not above 39C and does not run for more than two or three days, it is preferable where possible to allow it to run its course without recourse to suppressive measures, such as over the counter anti-inflammatories and pain killers. If the fever is brought down artificially when a youngster or adult is in no real danger, then there is a risk of preventing the body from expelling the toxins it needs to release.

From a natural medicine perspective, it is considered unwise to routinely block the beneficial natural process of fever, unless deemed necessary. An experienced and skilled natural medicine practitioner can carefully use remedies to provide a precise stimulus and support, thereby permitting the body to return itself to a greater sense of balance with the resulting resolution of the fever.

In mainstream medicine the current thinking is that the signs and symptoms of disease require supressing at the moment they appear. Long term, regular recourse to ibuprofen, paracetamol and fever suppressants might render a youngster ultimately unable to generate and carry through a fever, with worse-case scenarios including breathing difficulties for which antibiotics get prescribed, and then the potential effects of repeating cycles of fevers, chest infections, coughing and permanent rounds of cold symptoms and earaches. By routinely and unconsciously taking this course of action using gross acting medications, the primary symptoms may disappear, but at a cost. This habitual use of medications can drive disease processes deeper which could ultimately contribute to the development of new diseases, or result in the inability to develop a fever at all.

A natural medicine approach could easily be incorporated into your household, allowing you to benefit from the best of both systems when contending with fevers. Natural medicine systems operate with an intimate knowledge of the processes and dynamics of health and illness. Homoeopathy, for instance, renders its precisely individualised remedies safe and effective, and without side effects – after all the Hippocratic oath taken by physicians reminds us that they should “first, do no harm”.

Without doubt, a healthy diet, regular exercise and rest can act as a foundation upon which real lasting health is built and maintained, and is better than having to seek a cure. However, when illness does arise, the individualised treatments offered by Five Element Acupuncture, Homeopathy and Naturopathy can prove to be a timely intervention in supporting acute or urgent situations, such as childhood fevers.