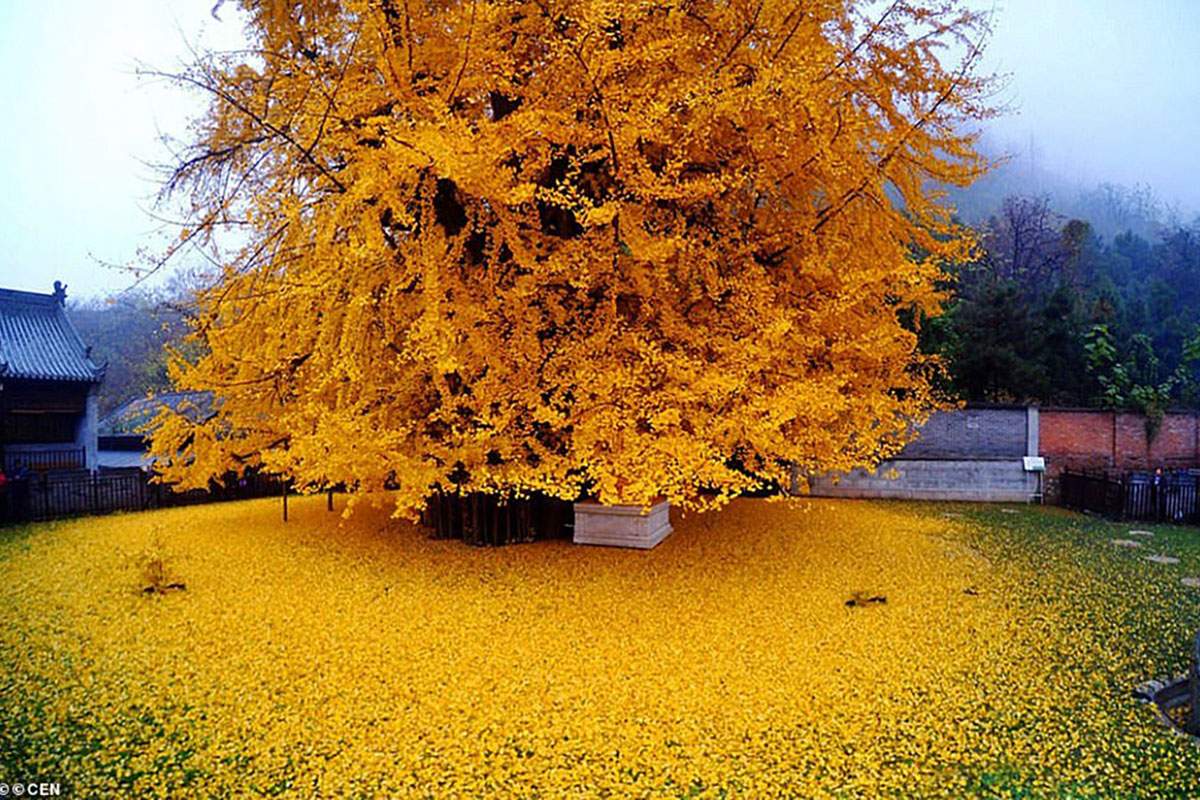 Around the Taoist and Buddhist temples in the East, the golden foliage of the Gingko Biloba tree in autumn/fall is a marvel to experience. The countless generations of people living near such trees have considered them their ‘world-tree’ – it takes three human generations to mature, hence its name “Grandfather-Grandchild Tree”. As the Greek proverb has it, ‘A society grows great when old men plant trees in whose shade they shall never sit’.

Ginkgo is perhaps the most ancient of trees remaining in existence today, having changed little over the last 270 million years. Some living trees today are estimated to be up to 2,500 years old and are considered sacred, representing eternal life and signifying Yin and Yang as both harmonious and opposing forces. The many ‘signatures’ of the tree are the ways in which the energetic meanings are read, relating to how the tree’s features appear to the outside world – its form, and the interior world – its formless spirit. United in the tree, the two forms though different need not be perceived as separate.

It is in this culture that Taoist Five Element Acupuncture has its roots.

As can be seen from the photograph, the very visible golden leaves are a temporal example of one of the Gingko’s ‘signatures’. Gold is located in the spectrum between orange and yellow – this colour vibration resonates and is associated with higher masters such as the Buddha.

Gold has a natural affinity with wisdom, in contrast with knowledge – ‘For wisdom is better than rubies; and all the things that may be desired are not to be compared to it’ (Proverbs 8:11).

In the self-journey towards greater wholeness an interior alchemy takes place, allowing the emergence of a depth of happiness and an effortless confidence. This wisdom has dawned from within and so naturally radiates out into the manifest world, and gold also relates to the idea of letting go or to non-attachment. Gold is perceived as the catalyst for this internal alchemy, whereby wisdom can radiate from the central core of the Self.

The gold of the leaves represents the heralding of an age of greater consciousness, shining light even into the dark recesses at the turning of autumn into winter, just as the Ginkgo tree is about to be laid bare and its outer form emphasised. In the winter, the tree’s inner resources are sent deep down into its roots, corresponding with the withdrawing into the interior realms of mankind.

The poet and mystic Goethe upon encountering a Ginkgo leaf in his garden wrote the following:

The leaf from a tree in the East,
Which has been entrusted to my garden,
Reveals a secret meaning,
Which pleases those who know.
Is it one living creature which has divided itself?
Or are these two, which have decided,
That they should be as one?
To reply to such a question, I found the right answer:
Don’t you feel in my songs and verses
That I am One and Two?

The tradition of Taoist Five Element Acupuncture, similar to contemplation of the remarkable Ginkgo tree, reminds us of our divine oneness. It speaks to humanity’s innate potential for a non-duality of experience, attainable on the earth and simultaneously within the heavenly realms – an experience so needed by modern man living in an increasingly materialistic world.

It may well be worth remembering that miracles rarely happen to sensible people.